It's International Women's Day! Who knew? I never heard about it much I don't think before I lived in Colombia, but it's widely celebrated here. And it's today! I got chocolate, flowers & kisses (ok, one....on the cheek) from students. Not bad.

Here are some of Cartagena's celebrated women (many thanks to This is Cartagena for some of these photos): 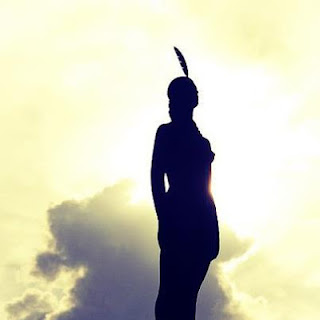 La India Catalina: now a well-known symbol of Cartagena as well as Cartagena's International Film Festival, she was an indigenous woman kidnapped by the Spanish in the early 1500s from this area. Twenty years later she returned with the Spanish and served as an interpreter in helping to pacify the various tribes here. There is of course a bit of controversy surrounding her. Wasn't she really just a traitor? Did she really look like this statue--tall and slim--while all the other indigenous people were short an stocky?

La India Catalina stands right outside the old city walls, and just about all local city buses pass by here. Poor Catalina, she's normally looking out over some kind of urban transport chaos! 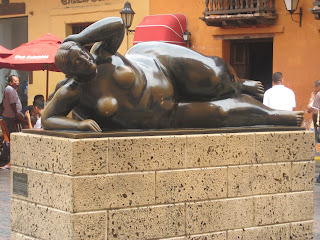 Gertrude, a sculpture by famed Colombian artist Fernando Botero, is more commonly known as "La Gordita", or "the fat woman." However, subjects painted and sculpted by Botero are not fat, but "voluminous." Gertrude is displayed in the Plaza Santo Domingo in the heart of the old city, a great place to have an evening drink at one of the many outdoor restaurants. In the maze that is the Old City, she's also handy to use as a place to meet (everyone can find her) or as a way to give directions: "If you're in the Plaza Santo Domingo, follow La Gordita's feet and go a block, then turn right." 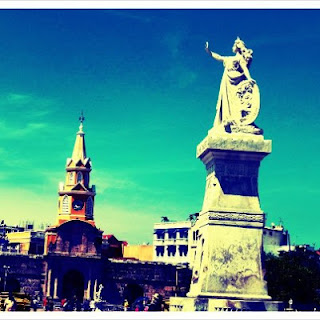 "Noli Me Tangere" says this woman facing the location of Cartagena's old port. This is Cartagena roughly translates it to, "Back off, pirates! I've got this covered." :) Not bad, not bad. In colonial times, Cartagena stored a lot of the Spanish empire's riches and was often the site of enemy attack. 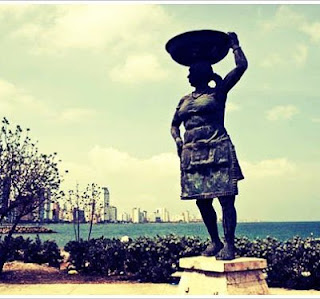 La Palenquera statue stands along the waterfront outside the old city, with the Bocagrande Peninsula in the background. As mentioned in previous posts, the women of Palenque, a pueblo outside of Cartagena originally founded by escaped slaves, have become a symbol of Cartagena. They wear brightly colored dresses and sell fruit and sweets carried in large bowls on their heads throughout the walled city. 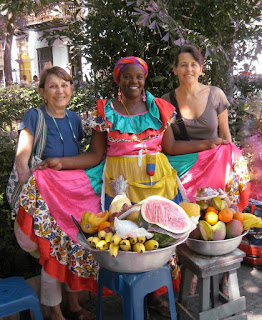 Above is Maria, the aunt of one of my students, with my mother and me in January. Those bowls are *heavy* and the women normally carry them on their heads...I don't know how they do it!