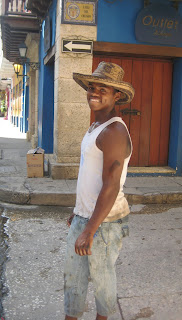 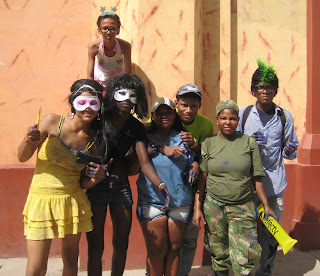 And the parties continued...! I realized only after my last post that the kids (mainly) covered in blue (chalk), black (motor oil?!), etc, ask people for money & if they don't get a coin, threaten to  throw paint or chalk on them or hug them (& thus "color" them). It's basically meant to be all in good fun. For a couple of the people I asked if I could take their pictures in exchange for the coin "donations". The guy above right is wearing a traditional Colombian hat called a "Sombrero Vueltiao", which, if one of the real hand made ones, is a true work of art. The group on the left all assembled themselves for the photo after I asked just one of them for a picture. Anything for fun! I still am not sure why I saw on a couple of different occasions grown men walking around dressed like babies: in humongous diapers with pacifiers. Will have to figure that one out later. A lot of people were covered in splotches of white powder, too--in addition to selling huge cans of spray foam (shaving cream-like) all over the place, vendors were selling boxes of cornstarch too -- the weapons of choice for the Fiestas Novembrinas!! :)

I must say that despite several days, well, nights, actually, of seemingly straight mayhem (and fun), the old town cleans itself up pretty well. Each morning the cans, boxes, cups, etc, that had been strewn around the previous night were for the most part gone.

After days of dodging shaving cream, cornstarch, and "colored hugs", it's back to reality tomorrow--the parties are over (for now!).

For all of my Fiesta Novembrina photos, view the slideshow here.
Posted by Barb(ara) at 9:39 PM

Barb - I'm SO SO SO sorry I missed your leaving. I got really wrapped up on work and blocked out most all personal emails for about 2 months. All I can do now is follow your blog (which I have integrated at the top of my myyahoo.com page - so I see it almost everyday). I read everything tonight and am caught up. Keep it coming! Miss you!!!1 Stephen