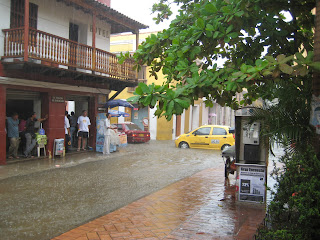 October and November are normally the rainy months in Cartagena, ie, winter. It has been raining off & on since I've been here but as long as I've had an umbrella, it's been nothing for me to worry about--it's warm rain & doesn't last that long.  I met some friends at the local Juan Valdez coffee shop last week (the Starbucks of Colombia, although not as prolific) and in the course of the 45 minutes that we were in there, it had gone from being completely dry outside to a torrential downpour. After what seemed like just a few minutes, the streets were flooded although cars continued to plow through. People took shelter wherever they could or just waded through the water, with or without shoes on. Another 30 minutes or so later, the rains had stopped, the flooding receded, and all was back to normal.

However, there has been a lot of serious flooding in various parts of Colombia, and even since I've been here there was a town in the interior that had been without water for 12 days due to complications from the rains: a landslide hit the town's main water supply lines. There are people in the Cartagena area who have been affected by flooding also, although I haven't personally seen it.
Posted by Barb(ara) at 3:16 PM