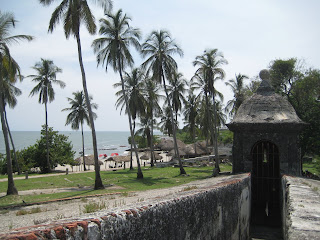 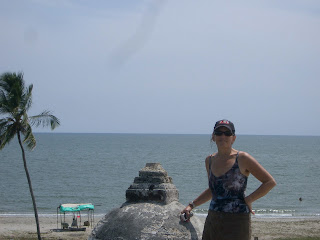 Last weekend I visited Bocachica with some friends. This is a small village on an island in the Cartagena Bay, just a 15 minute boat ride away. There's a small but nice and uncrowded beach here right next to one of the forts that helped protect Cartagena from the enemy: the French, English, Spanish, and/or pirates, depending on what point of history we're talking about. The San Fernando Fort was built on Terrabomba Island just at the opening of "Boca Chica", or small mouth, through which ships could enter Cartagena Bay from the Caribbean Sea. On a small island on the other side of this passageway, the Battery of San Jose was built. A large, heavy chain was strung between these two structures which was used to impede passage of those they didn't want entering. (There is also "Boca Grande", or big mouth, but that entrance had been blocked at one point accidentally via sunken ships and at another point on purpose in order to more easily protect Cartagena; it is still blocked to large ships.) 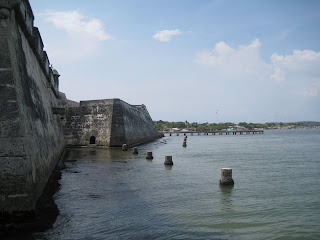 This weekend I finally visited the Naval Museum of Cartagena. There is a TON of information there on the history of the Spanish coming and taking over the land; Cartagena as a principal stop on the trade route between the Americas and Spain; Cartagena as a principal slave port for the Americas; and the intricacies of what was going on with the various European crowns, i.e., who was marrying or not marrying whom which caused or stopped the various wars (which also affected what was happening in the New World of course). In addition, they talked about how the fortifications were made, and one of the ingredients in the walls is horse doo doo, how can that be?? And just to add a little spice to the museum visit, it's haunted! I had read about this in the local paper a few months ago and there were displays telling about the different paranormal visitors: there's a ghost who often pushes people down the stairs, a couple who roam the upstairs balcony, a headless pirate who's been seen at the helm of one of the ships, and more. I didn't sense any of them during my visit, but perhaps I should go back at night..... :)

More photos from Bocachica can be seen here.
Posted by Barb(ara) at 2:51 PM